On Saturday 30th July, the Race 4 Reuben team returned as defending champions to race at the British 24hr – a kart endurance race that lasts over a lengthy 24 hours. They raced in memory and honour of Reuben, who was sadly lost to childhood cancer in 2017. We wished them all the best of luck for the big 24-hour race!

We spoke to Team Captain and Reuben’s father, Wayne Clark, before the big race. He told us a little about why Race 4 Reuben was initially set up:

“Race 4 Reuben is a kart team competing in 24-hour kart endurance races. We set up Race 4 Reuben in 2017, while my son Reuben was fighting Neuroblastoma. He sadly lost his fight in August 2017, and the following week myself and the team competed in our first 24-hour kart race in his memory and honour. Since then, we have competed in the British 24hr at Teesside every year and have travelled to Le Mans in France twice to compete in a 24-hour kart race there.

“We race as number 95, like Lightning McQueen from the animated movie ‘Cars’, as this was Reuben’s favourite character.” 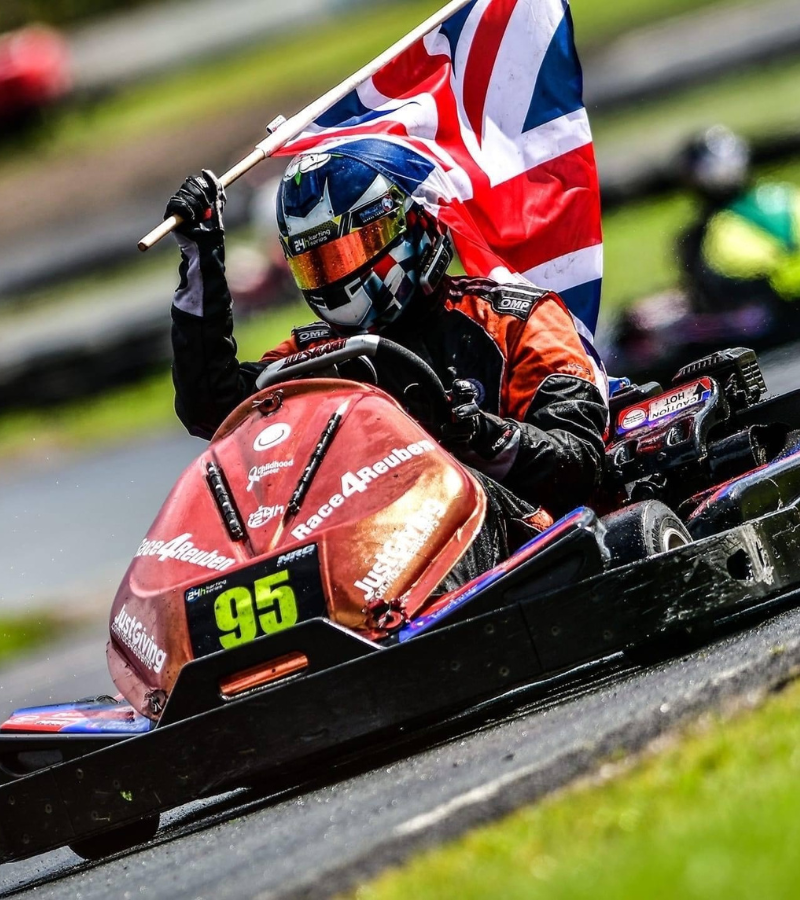 We spoke to the team before the big race who were gearing up for this year’s British 24-hr in Teesside after their big win last year. Wayne told us all about it:

“2021 was an extra special year for me and the team when we finally finished in 1st place in the British 24hr, beating 63 other teams after trying so hard for the past four years. This year we return as defending champions with the race starting at 12pm on Saturday 30th July at Teesside Autodrome. We are arguably now the most recognised and most respected team on the grid.

“I run the team as captain and also a driver. My brother, Sean Clark, has been involved with the team since the beginning as pit crew. He also creates the team logos, manages our social media, videos and other promotional materials. I have had some different driver line ups over the past five years based on talent, experience and suitability. All of them I met at my local karting track and have become good friends with.

“Competing in a 24-hour race is a real test of skill, stamina, endurance and teamwork. There will also be up to 60 other teams to race against. As a team of five, we race flat out for 1 hour and 40 minutes until the kart needs fuel, then we pit stop for fuel and driver change and then carry on until the chequered flag, all day all night whatever the weather. It’s not easy, but the courage and determination Reuben showed throughout his treatment will always be our inspiration. I had a smaller replica trophy of our 2021 win made which now sits on Reubens headstone.” 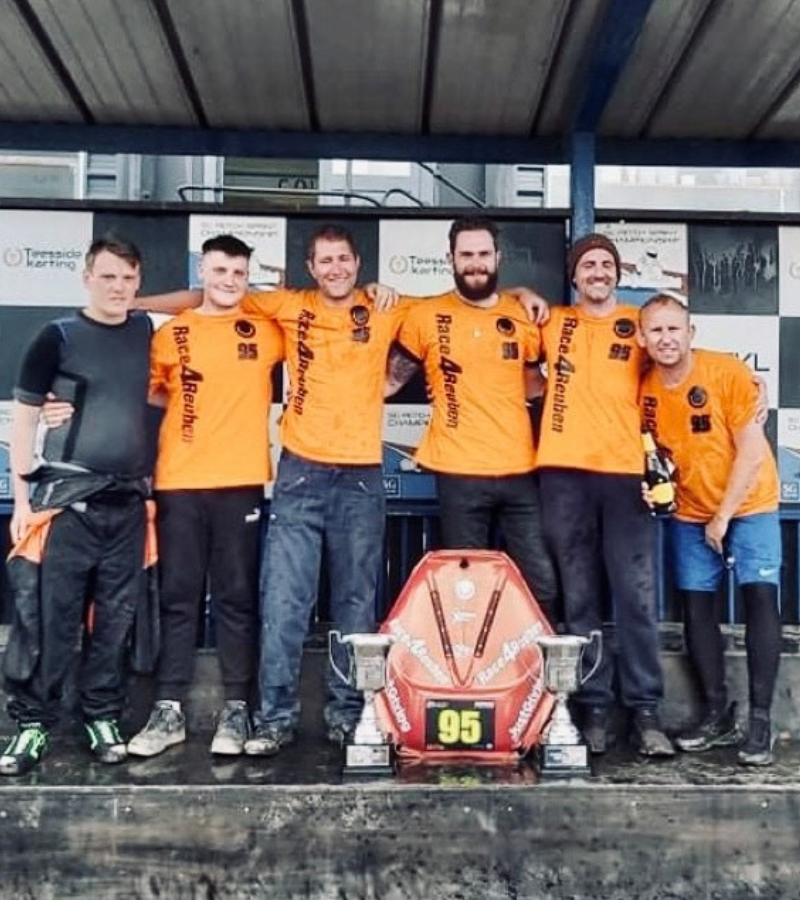 About all the amazing fundraising that Race 4 Reuben have done, Wayne told us:

“For our first race we initially set out to raise £2,000, we in fact raised over £6,000 over that weekend. The Red Bull F1 team once donated a signed cap for us to auction which raised £500! To date we’ve raised over £11,500 for Children’s Cancer North. We always aimed to bring home a podium finish for Reuben and so it was an amazing accomplishment winning the event last year.” 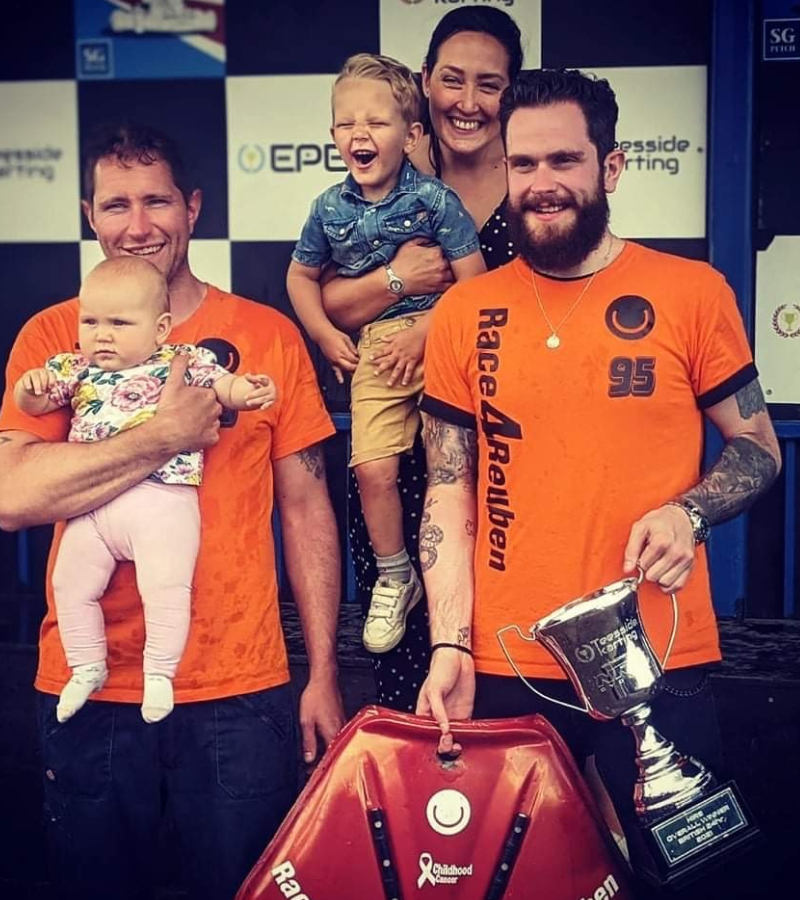 A beautiful and touching quote

After their glorious win last year, Wayne posted this beautiful and touching tribute to his son on his social media:

“We finally got the win for you son. You inspired us to never give up. To keep chasing the seemingly impossible. To show courage and strength in adversity. To rise up higher after every fall. We did it all, for you and because of you. You made us champions!”

We caught back up with Wayne after the big race on Saturday. Race 4 Reuben finished 9th out of 60 karts in the race. Although not the coveted number 1 spot the team had their eyes on, we still think the team did a fantastic job getting to 9th, and in such difficult weather conditions. Here’s what Wayne told us:

“We qualified in 5th position out of 60 karts which was a great starting position. After making it through the mayhem of lap 1, we settled into a rhythm of setting quick lap times. We pitted for fuel very early to avoid being caught in the pit lane with 59 other karts needing to fuel at the same time.

“This strategy worked very well and at 25% race distance we were at position 2 and catching the lead kart due to some great driving by the team in changeable weather conditions. At midnight, halfway through the race, we were comfortable in position 2 with no threat from behind and still keeping pressure on the team in position 1; who are a very quick team from Belgium, and usually the favourites to win each race they enter.

“Shortly after midnight the heavens well and truly opened, and the rain would continue all morning. At around 2.30am the conditions were almost impossible to drive in. We suffered an engine failure then a spark plug failure shortly after due to the heavy rain. This cost us around 10 laps in the pits and dropped us down to position 10. Eventually the race was red flagged at 6.30am due to the waterlogged track. We ended up 9th out of 60.

“Not the result we wanted and also disappointed not to complete the full 24 hours. But we proved we have the ability to compete at the front on a regular basis and can still challenge and beat the very best teams from across the UK and Europe.

“We will return next year with the same goal.”

Thank you from us at Children’s Cancer North to Wayne and his family, for sharing their touching story. It’s absolutely amazing how much hard work, effort and determination Race 4 Reuben has put in, in memory of their hero, Reuben. What an achievement to bring back the gold last year at the British 24hr whilst competing against 63 other teams. And to come 9th out of 60 this year with the extra weather conditions and kart failures faced, you are truly a world-class team to look out for.

Thank you for helping to make life better for other children and families affected by childhood cancer, by fundraising such a mega amount of over £11,500 in your fantastic efforts.

You can find out more about Race 4 Reuben and donate to their JustGiving page. Have a look at their Facebook page @race4reuben and give them a like and follow too! 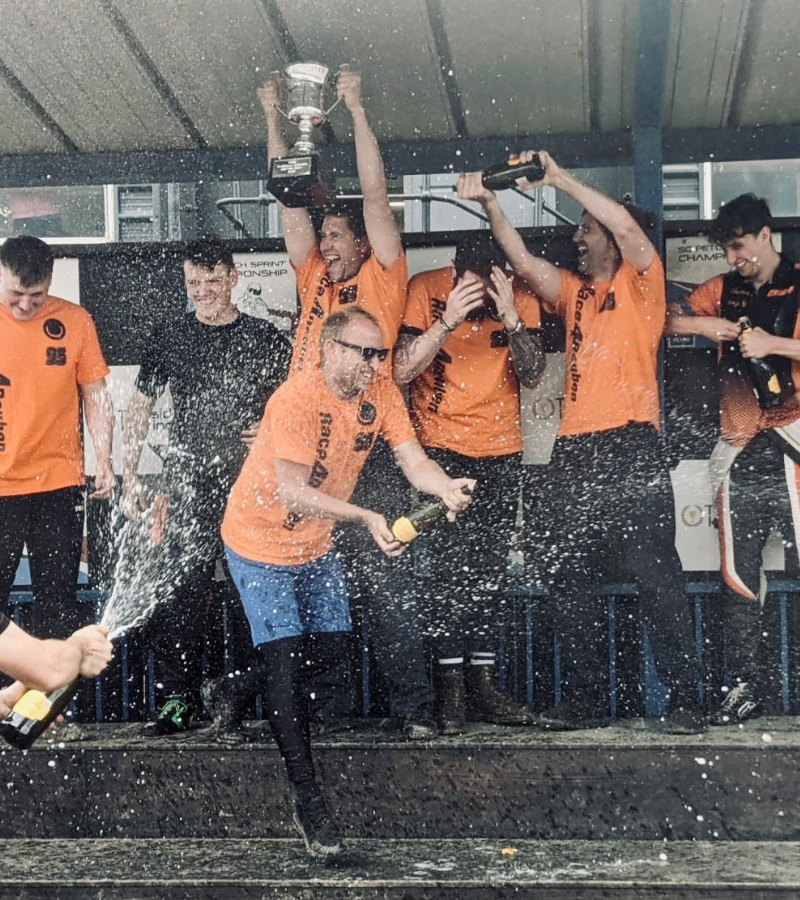 Proud to collaborate with Newcastle Hospitals Charity
Back to top
Why not sign up to our newsletter? Click here
×