I had the pleasure of interviewing Tom Madge, Animation Practitioner and owner of AnimateCity. Children’s Cancer North funds Tom to provide animation creativity and fun for the children and young people in treatment on the children’s cancer ward at The Great North Children’s Hospital.

Note from the interviewer…

If you’ve read some of my previous interviews, you will know that I like to tell you a little about the person that I am interviewing. Tom is a very lively, energetic and passionate person and this reflects in the work he does on the ward.

He told me how he has been able to be funded by our charity through your donations, fundraising and support for the last 13 years, which is amazing! It was great to hear about all the brilliant work that Tom does on the ward but how much of a positive impact it is making to the children and young people spending their time in hospital.

Have a read of this interview for all on how animation is sparking creativity, fun and imagination amongst the children and young people at The Great North Children’s Hospital. 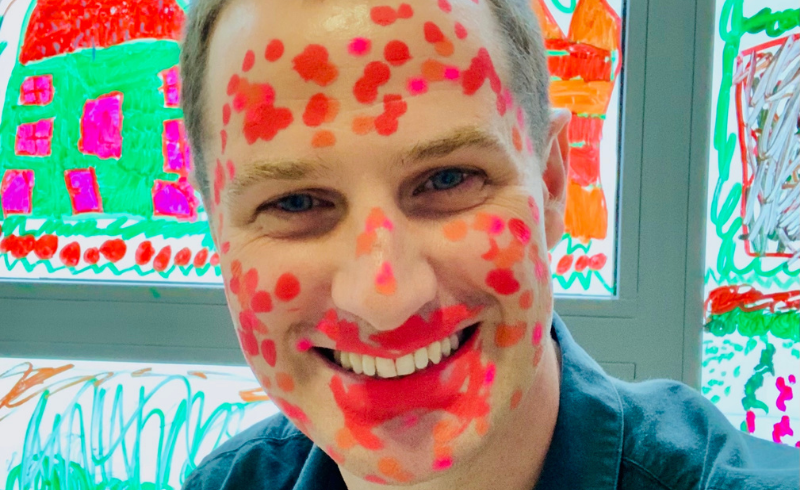 I had an idea of what animation was but I had no idea it could be done in the way that Tom described, which was very interesting to learn about:

“Animation is all about being hands on. We use a range of different materials to manipulate them to create a story. It’s really not all about the tech. You can use any materials you want and create animation through a process called ‘stop motion’. So what you would do is create a series of images which then can be turned in a video to tell a story. What’s great about doing it this way is that the children and young people can pick up animation really fast as it’s very easy to do.

“I usually will provide a keypad so that the child or young person can have control over taking the pictures that are needed to create the animation. I’ll set out the table with a bunch of materials with a computer and camera available to allow for a mini animation studio. No video recording is needed at all.”

I asked Tom to tell me a little more about what happens as part of an animation session, and he told me about how gaining good rapport and a sense of trust first from a child or young person was one of most important parts of the process.

“On ward 4 they call me the animation man or animation guy. My role is two days a week and each day can be completely different. It depends on who’s there, have they got the energy, are they interested to do animation at that time? You never know how the day will pan out.

“I’ll get a list from the ward team on who is in, anyone from ages 5 and up, and ask the team who they think would benefit the most on the day. Then I will approach the child or teen which is definitely the most important part.

“I first will start with the fact that I am not part of the medical team, as they can get worried about it. They can usually tell by my casual clothing, that I’m not part of the medical team. I’ll then ask them how they are feeling, how they are doing. It’s important to make the conversation about them, to gain their respect and trust. It may be asking simple things like how they’ve slept, as it’s common for them to be tired – it might have been that they’ve ended up getting up to go to the toilet multiple times through the night due to the treatment that they are on.

“It is important to then sell the idea of spending some time doing some animation. So I try and tap into what the young person is into as you’re in their personal space and time. And I spend that time to make them feel like it won’t be awkward to spend time with me doing some animation, in particular this is important to establish with the teenagers. I assure them that this won’t be anything like a school lesson, that it will be a fun and easy-going session that will allow them to create whatever they would like, and that I will be there to help them with it.

“The children are often very keen to do an animation session, whereas the teenagers sometimes need a little bit more encouragement. Their interests are more developed and specific so it’s important to tap into something that interests them.

“Maybe they don’t want to get involved at the time but I am persistent in giving them an opportunity if they want to when I go in. It’s with these children and young people that I often have the most success, when they finally choose to give it a go, they seem to really enjoy it!

“What’s great to see, is from starting small with the animation, the idea then grows and before you know it the creativity has flown, and they’ve really got into it.

“It’s important to be patient throughout the process. For example, there are times when a child has fallen asleep during an animation session due to being extremely tired from their treatment or their treatment needs can interrupt a session, so it is about being flexible and certainly patient focused”

Supporting children and young people to improve their wellbeing

Tom told me about how animation can support and develop the wellbeing of a child or young person positively, in what is a very challenging situation for a young person to have to go through.

“As they are in hospital, a lot of the usual kind of opportunities you’d expect a young person to have are unfortunately stripped away, which can be a real mental and emotional challenge. Through animation my goal is to slowly bring some of the opportunities back by allowing them a place to grow with their ideas.

“By providing animation sessions, it can help to improve a young person’s wellbeing and self-esteem by giving them something that they can take ownership over and grow in creativity. It also helps them to develop social links by working with some of the other young people on a project. It’s lovely to see them get so creative and excited as they develop their ideas together.”

What do they have to say?

Claire Craig is parent of son JoJo, who is currently receiving cancer treatment at The Great North Children’s Hospital. She explained how Tom and his animation has greatly helped JoJo’s mental health and sparked a love for animation in JoJo:

“My son has spent pretty much the last six months in hospital. He has started to really struggle but one thing that always keeps him going is Tom and the work they do. It’s not just animation they do together they also talk, and I know for my 7 year old deep thinker, that Tom has helped him so much mentally.

“JoJo has loved learning about the animation so much that when JoJo won a bravery award and was asked to pick a gift as a reward, instantly JoJo picked an animation kit. Tom has definitely sparked a love of animation in him. Huge thank you for providing this amazing programme for kids like JoJo.”

“It’s great to get the positive feedback from parents who have had to see their child down, struggling or uninterested to then through animation show such enthusiasm. They can get really excited and energised by it. They are feeling that spark of their own creativity and talent again, and love to show their animation to their family and the staff at the end of the session.” 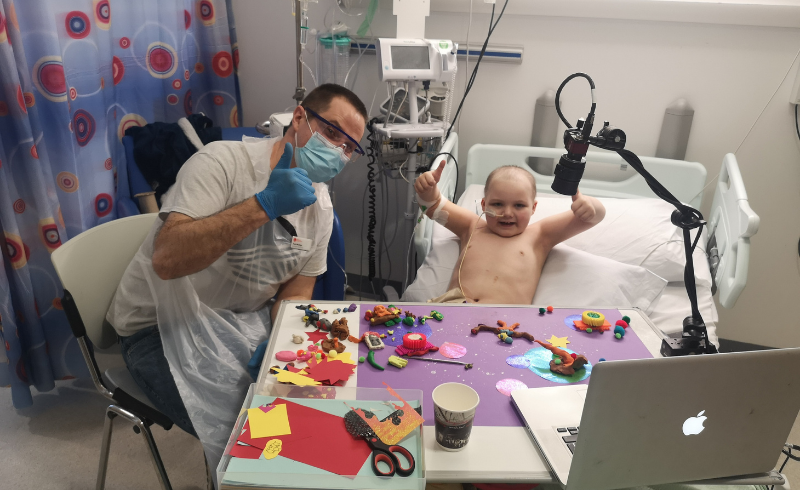 I asked Tom what he found most rewarding…

“I love seeing the impact it has created and how positive they are too. I get to watch their unique personalities shine through their animation and no animation is the same. I love the process and helping them to enjoy it.”

Having trust from the hospital and Children’s Cancer North

Tom wanted to mention that being trusted by The Great North Children’s Hospital and Children’s Cancer North allowed him to be flexible and open in his approach to the work that he does.

“I’ve been able to be really focused and it has over the last 13 years allowed me to grow organically. The team are lovely and see me as part of their team.

“Some of the Children’s Cancer North trustees work directly on the ward and it’s lovely for them to see first-hand the impact that animation makes on the children.”

Tom showed me this video that he put together that tells us about the work he does on the children’s cancer ward but has some amazing snippets of animation work done by the children and young people. Do have a watch!

A final thank you

The team at Children’s Cancer North would like to thank Tom for the amazing and impactful work that he does. We would also like to thank you, our continuous community of supporters. With your donations, fundraising, volunteering and all that you do for our charity, we have been able to continuously fund Tom’s ongoing work for the last 13 years.

If you have any suggestions of what type of interviews or stories you would like to see next, you can email thamy@childrenscancernorth.org.uk

#MeetTheTeam – Janet Cairns, Fundraising Manager
Back to top
Why not sign up to our newsletter? Click here
×