In memory of Sophie, a brave girl lost to cancer

Sophie Welburn was just 4 years old when she was diagnosed with a rare inoperable tumour in her brain. Eight and a half months after diagnosis, Sophie peacefully passed away. Her parents, Louise and Chris, felt it was important to raise awareness through telling Sophie’s story.

Sophie’s parents, Louise and Chris, described her as like any other four-year-old, but also with her own unique personality. They said:

“She was very bright and intelligent and was developing a very dry sense of humour. She loved going to nursery and loved life in general.”

Aged five, Sophie attended the Outdoor Pre-school in Darlington, before her diagnosis in July 2021. She ploughed on and began her primary school studies at Abbey School in the autumn, never losing her humour throughout it all. 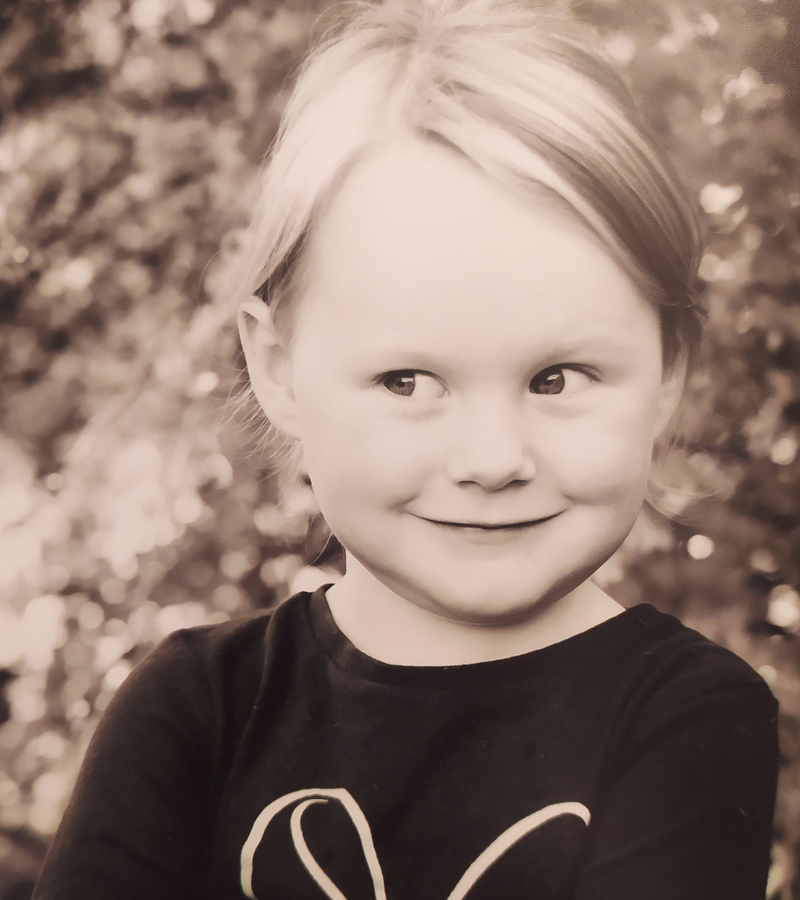 Speaking to Louise and Chris about the moment they noticed something different about Sophie, and the time they found out of Sophie’s diagnosis, they told us:

“We had noticed that Sophie’s walking was becoming a little stumbly and wobbly, so we took her to our GP. After first being told to “come back in six weeks if she’s no better”, we went back to the surgery a week later, as her symptoms had worsened, and insisted to be referred to an expert. That was on a Friday evening and by the following Monday lunchtime, following a scan, we were told by a consultant at Darlington Memorial Hospital that Sophie had a brain tumour. We were immediately taken up to the Royal Victoria Infirmary in Newcastle, where a more detailed scan the next day revealed the tumour to be a Diffuse Intrinsic Pontine Glioma (DIPG).”

A DIPG is a very rare but fast-growing brain tumour. It forms in glial cells in a part of the brain stem called the pons. The pons controls the nerves and muscles that help us perform basic but vital functions such as walking, talking, breathing and swallowing. A DIPG takes over this area of the brain and gradually stops these functions working. Sophie’s parents were told that the tumour was inoperable and her prognosis was terminal, with an estimated life expectancy of just nine months. “We were told to make memories” Sophie’s parents recall. 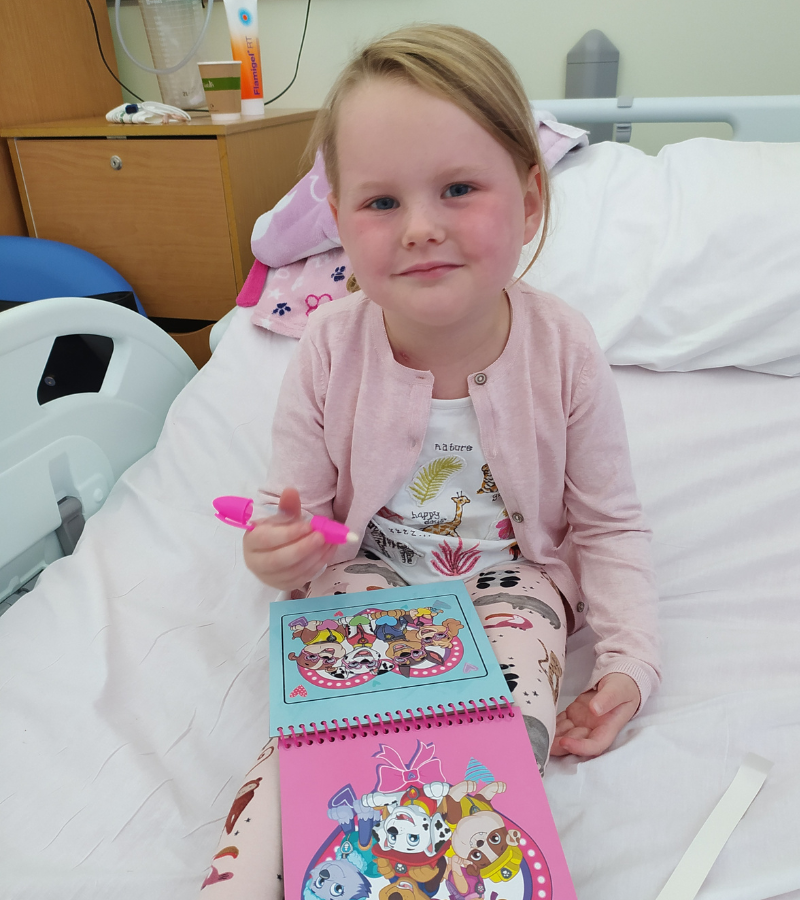 When asked how Sophie’s diagnosis affected her and their family, Sophie’s parents told us:

“As she was only four when diagnosed, she was oblivious to her prognosis. Throughout the next eight months she never questioned what was going on or why she was slowly deteriorating. Her speech became slower, and her sight was affected as her eyes became crossed. Despite losing a lot of her mobility, particularly in her left arm, she continued to make the most of each and every day. She started school and loved attending when she could.

“As Sophie’s parents, we were obviously devastated. The moment we were told that our daughter had an inoperable, incurable brain tumour, with a zero percent chance of survival, was like living a nightmare, and it is still so vivid. Telling Sophie’s 11 year old sister, Niamh, was terrible. 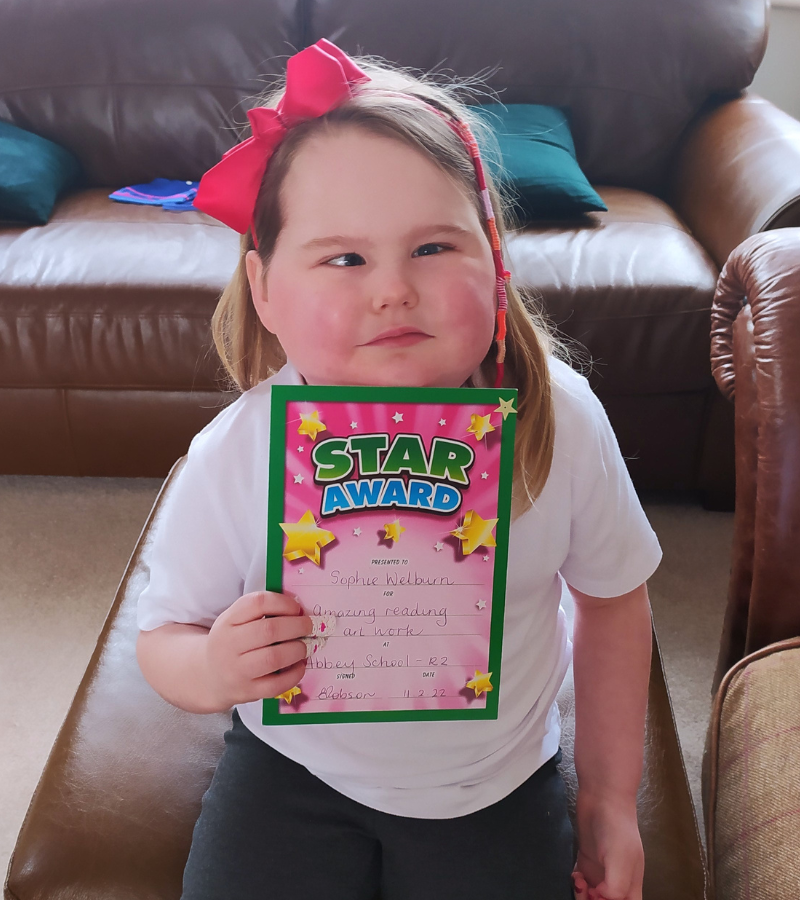 “As we only had a short time left with Sophie, our employers allowed us to forget about work so we could look after her and make as many memories as possible. We went on one last foreign holiday to Tenerife, visited Blackpool, London and stayed at ‘Jess’s Dream’ lodge near Hexham; Jess was another child who was lost to childhood cancer and her family created a beautiful place to stay, where families affected by childhood cancer can have a break. We were fortunate enough to be able to go there twice. Sophie did as much as we could possibly cram in to those eight months, including having a visit from a ‘real’ unicorn, feeding the penguins at Flamingo Land and being a bridesmaid at our wedding that we hastily arranged so Sophie could be part of the day.” 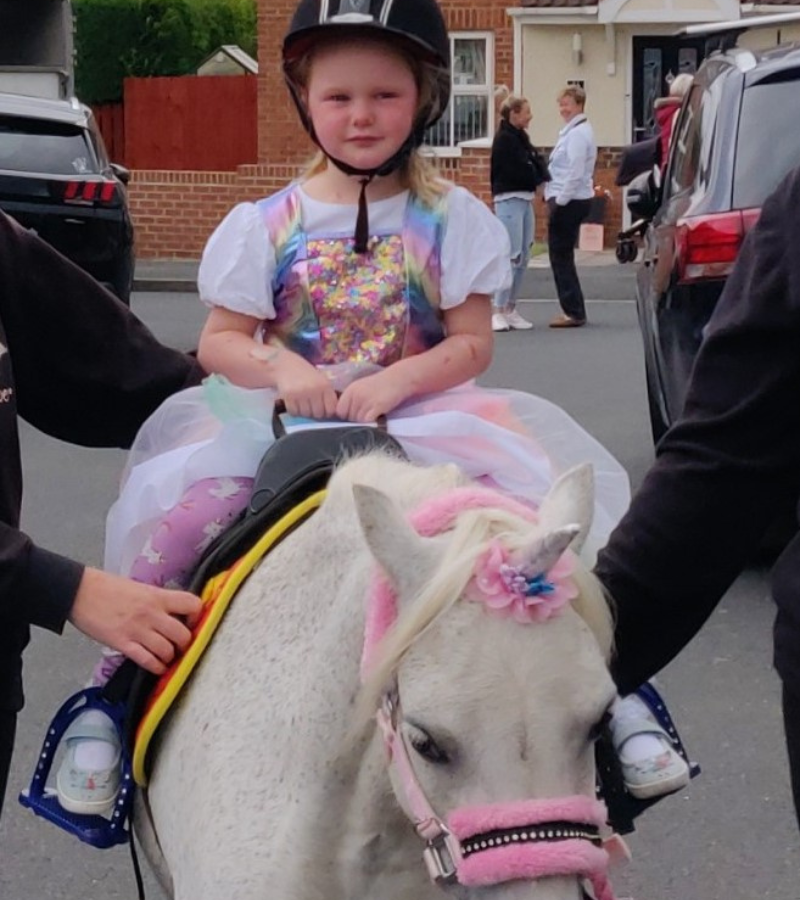 Following an initial biopsy that confirmed the type of tumour, Sophie underwent a six-week course of radiotherapy whilst on a low dose of steroids. Steroids reduced the swelling caused by the tumour and radiotherapy shrinks the tumour itself, both of which alleviate the symptoms Sophie was showing. As the tumour progressed, the steroid dose was increased in order to keep Sophie functioning as much as possible. Her parents tell us more about the treatment that Sophie received:

“In February 2022, Professor Simon Bailey (Consultant Paediatric Oncologist at The Great North Children’s Hospital, specialising in neuro-oncology and a Professor of Paediatric Neuro-Oncology at Newcastle University) told us he had secured the compassionate use of a drug from the USA, which was starting to be used in children’s brain tumours with the hope of slowing growth. The drug had not yet gone through UK clinical trials, but it was worth a shot, so Sophie was one of the first children in Europe to be given it. 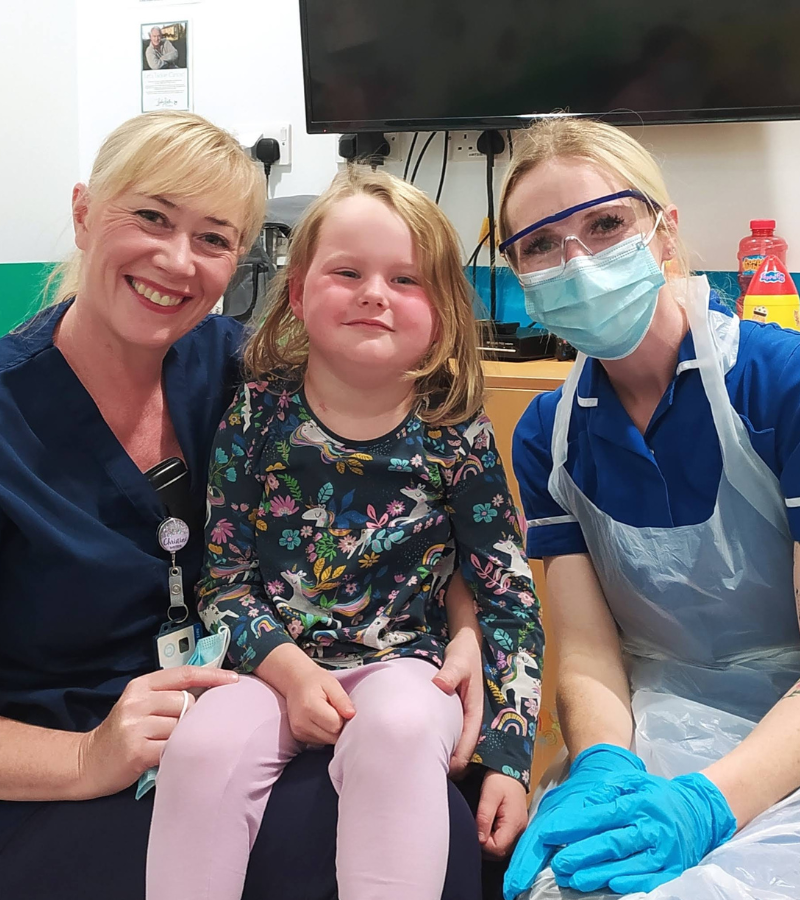 “The care given by the teams at both The Great North Children’s Hospital and the Freeman Hospital, where radiotherapy took place, was amazing. In particular the staff on wards 4 and 14, Joanne and her radiotherapy team, Kirsty and her radiotherapy nursing team and all of the play specialists who have an immense role in keeping children entertained and engaged when they are in hospital. We especially also want to thank Professor Simon Bailey and Kelly and her incredible CYPOONS (Children and Young People’s Oncology Outreach and Symptom Care Nurse Specialists) team. Thankfully Sophie didn’t have to spend too many nights in hospital, but on the occasions she did we were all looked after really well.”

“The cost of Sophie’s funeral was covered through a government grant, but we were very grateful to receive a bereavement grant from Children’s Cancer North after Sophie passed away. We used it to take Sophie’s sister, Niamh, with us on a holiday to Cyprus a few weeks after Sophie’s funeral. Our first holiday without Sophie was always going to be tough but it helped us to recuperate a little and explore somewhere new. 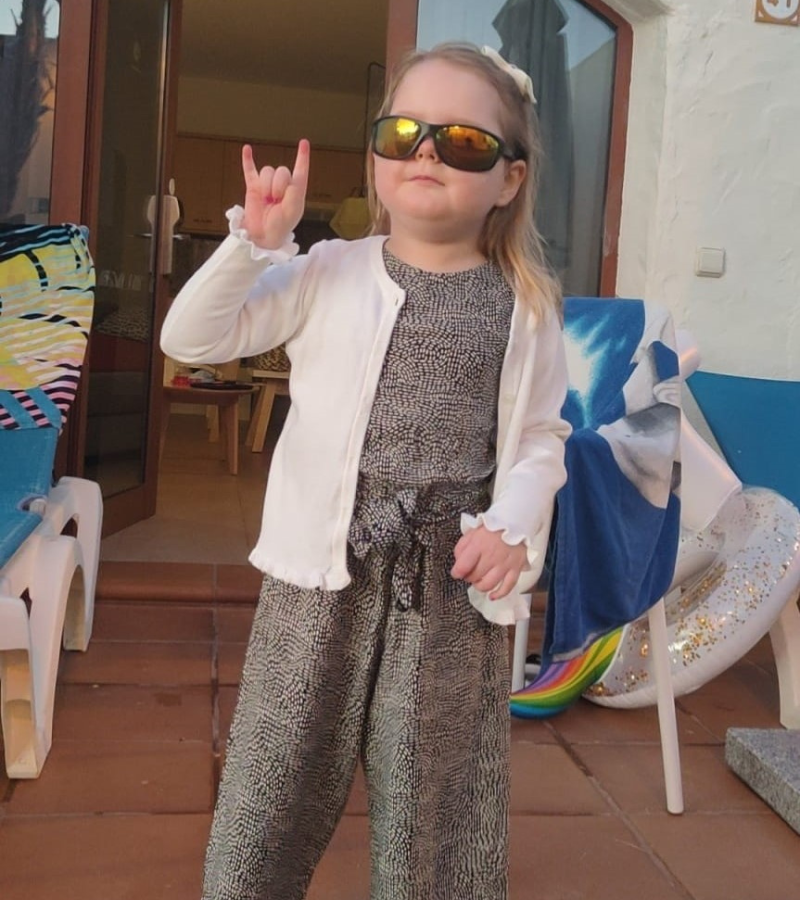 “We’d like to say a big ‘Thank You’ for the help Children’s Cancer North gave us, and for the help they continue to give to other children and families trying to get through the worst possible period of their lives.

“There are several reasons to support Children’s Cancer North – the main one being the care they provide for the children themselves as well as their families. Children’s Cancer North donations go directly towards patients treated on the cancer wards at The Great North Children’s Hospital, funding staff, projects and play activities for children. They provide information packs to parents, who suddenly find themselves on a cancer ward after initial diagnosis – a time where your world feels upside down. They also help fund vital research into childhood cancer, undertaken at Newcastle University.” 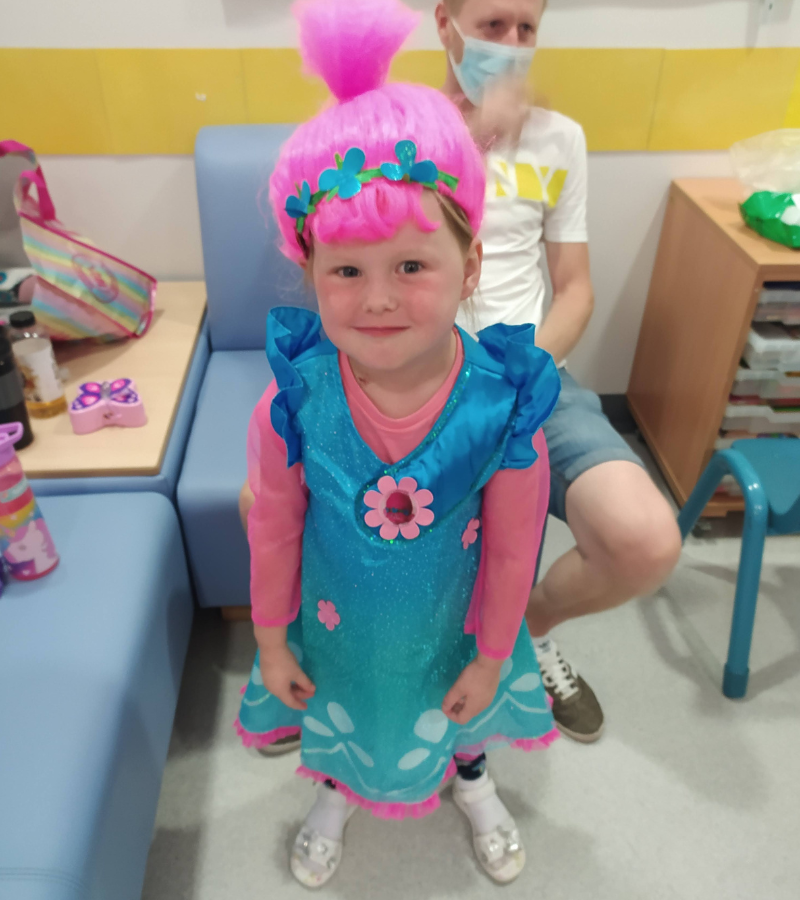 The importance of telling Sophie and the family’s story

Although it has been an unbelievably difficult time for Louise, Chris, Niamh and the rest of their family, they are determined to share Sophie’s story. They told us how it is important for them to be able to raise awareness into childhood cancer, to allow for greater fundraising efforts for other children and families who have been affected too, and to raise money for brain tumour treatment. They said:

“Eight and a half months after diagnosis and following a pretty rapid decline in her final week, Sophie passed away peacefully at home surrounded by her family. Sophie didn’t know she was terminally ill, so we didn’t raise awareness too much when she was still with us. However, when we no longer had to protect her, we felt we owed it to her to get her story out there to raise awareness of the condition and to let people know that in spite of the unbelievably cruel battle she faced, she always maintained a smile on her face and a chuckle.”

“At our wedding, in lieu of presents we asked for donations and our generous guests raised £2,500. The school Sophie’s mum works in raised £400 through non uniform days. At Sophie’s celebration of life service, held at the same theatre where we got married a few months earlier, we collected over £1,000 in donations.”

Sophie’s grandparents Samantha and Julie have taken on a fantastic challenge of ‘virtually walking’ from John O’Groats to Lands End over the year. That’s 843 miles in 365 days. Sam is completing all the miles on the golf course, playing rounds at as many courses in the North East as possible, and Julie is doing a combination of rounds of golf and walks. They are currently just over 500 miles into their challenge, with Sam preparing to complete an amazing four rounds of golf in one day in her ‘longest day’ challenge on 21 June. To donate towards their fundraiser for Children’s Cancer North, you can text SAMJULIE to 70085 to donate £10 – texts will cost the donation amount plus one standard network rate message.

“The coffee morning went really well, tickets were sold out and everyone who came commented on how well it went. We are very proud of the Abbey RotaKids who helped plan and organise it. The coffee morning and cake sale raised £926.37 and the Year 4 ‘run for charity’ raised £966.80, so in total the children have raised £1,893.17.“

A final thank you…

The team at Children’s Cancer North would like to thank Louise, Chris and their family for sharing their moving and impactful story. At such a difficult and unimaginable time, we are in awe of the strength and courage that they have shown, to raise awareness and encourage fundraising for the benefit of other children and families facing their own personal challenging journeys. Thank you for meeting with us and taking the time out, to allow us to share your story in this way. Thank you for all the generous fundraising your family has raised already and is still raising on an ongoing basis.

A huge thank you also to the staff and children at Abbey School, who have fundraised an enormous amount for our charity.

If you are a family affected by childhood cancer and would like to tell your story, please email thamy@childrenscancernorth.org.uk.

Eco-friendly Medals for Children’s Cancer Run
Back to top
Why not sign up to our newsletter? Click here
×