Fundraiser of the month: John Gardiner

Our fundraiser of the month is a very special man, having raised a very considerable amount for our charity in memory of his grandaughter Emma who sadly passed away from leukaemia after five years of treatment.

John did his first Great North Run just before turning 62 in 2012 and since then has been an avid supporter of us. We interviewed him to find out a bit more about John, and why he likes running around taking pictures of sheep!

Why did you decide to fundraise for NECCR?

I decided to raise funds for charity as a recognition of the tremendous work done by the NHS in their treatment of our granddaughter Emma who was diagnosed with leukaemia at the age of three. I’d already raised my first amount for Leukaemia and Lymphoma Research before I discovered through my daughter Ruth (Emma’s mum) the NECCR. It seemed more personal and appropriate to support a local charity considering that Emma’s treatment was in the (then) RVI and the funds would be of benefit both locally and further afield.

What sort of fundraising activities have you done to date?

I have only raised money by running half marathons. 5 Great North Runs and one Sunderland, plus the GNR Solo this year. I started running just a few months after I’d turned 60, with the sole aim of doing one GNR (having been nagged by Ruth into reluctantly applying and hoping I wouldn’t get in). I only ran while it was dark initially because I was embarrassed about being spotted around my village. But actually people were eventually impressed I think. I loved the experience and perversely the training so I just carried on. Almost ten years later I’m still doing it, slowly.

How much have you raised along the way?

I’ve raised about £17,500 and virtually all has gift aid attached so making it over £20,000. I find it amazing that people have been so supportive.

I think the bulk of my sponsorship has come, certainly when I first started, from people I used to teach and their families who I had the pleasure to know during my almost 40 years teaching in Gateshead. And all through Facebook where almost all my friends list was those people. Once some of them knew about Emma I posted regular updates and amusing anecdotes about her progress. I felt that she was out of circulation so much that people should know just how funny and courageous she was and how that reflected the children who we met in the Ward. They loved the photos and often sent me messages asking how she was.

When she needed a bone marrow transplant in 2010 the numbers of people who applied for donor testing kits was awesome. This comment was by a lady associated with the Anthony Nolan Trust when speaking on the phone to an ex-student of mine.

I only raised money ( except for family) through social media because I’m not good at asking directly but also because I reached so many people. That gave them the chance to opt-in or out and I like that they could offer support while not feeling obliged to fork out.

Tell us about your sheep and the link with your fundraising!

When I taught I had a sheep thing going. In the early 90s I taught Geography for a while. I used to draw a mountain and embellish it with a cloud type sheep. Bit of amusement. I then used the same kinds of sheep drawings in assemblies to humorously illustrate points. It then became a thing to bring me fluffy sheep as gifts, send sheep birthday cards and Christmas cards etc. I ended up bringing two large boxes home when I retired.

I wanted a way of thanking sponsors so before the sponsorship page went live we’d drive around the countryside with sheep and take pics in scenic and silly places. I’ve even done them in France and the Canaries. As soon as someone sponsored me I’d tag them in a pic as a thankyou. Some sponsors now request a particular sheep as their reward. I have sent them to people in Australia, USA, Austria, Hong Kong and all over the UK and Ireland.

Any tips for others fundraising from what you’ve learnt along the way?

If there is one tip I have from this it’s that people enjoy feeling involved and probably like being thanked. And the public nature of Facebook encourages anyone who wants to feel a part of it.

Because of the nature of the GNR solo I took a sheep out with me on every one of the forty runs and did a photoset each time. I also posted my calories used so people got to eat cake as a reward. I just needed a different angle and wasn’t sure it would work but it raised over £1,800 I think.

What did Emma think of your running?

Emma loved that I ran but that never prevented her from indulging in her usual Grandad sarcasm.
“Grandad I was in the car and I saw you running. I couldn’t believe it…my little old baldy grandad….actually running.”

And on holiday in Scarborough one hot day we had this conversation:
“You off running Grandad?”
“Yes Emma. Won’t be long.”
“It’s hot. Don’t die mind.”
“Oh are you worried about me pet?”
“Not really but I need you to BBQ my chicken later.”

Thank you John for your wonderful support from all at NECCR. 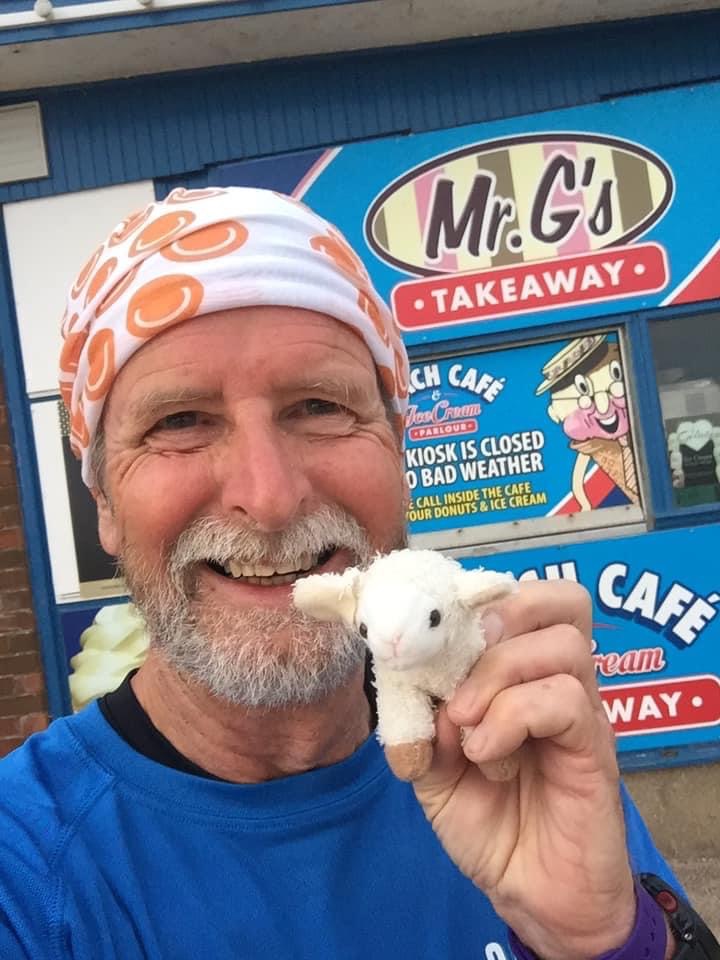 5 things that make The Climb good for schools.
Back to top
Why not sign up to our newsletter? Click here
×