During October 2020, a number of enthusiastic supporters took on the hardest of our challenges in The Climb - to scale the height of Everest. Here are some of their stories...

Sam is a Clinical Scientist at Newcastle Hospitals and took on the Everest challenge to raise money in memory of his daughter Sienna, who sadly passed away last year due to cancer.

Sam said “I am doing this for my daughter Sienna, who died age 4 after a 2 year battle with leukaemia. Clinical research is so important, and is the only thing that drives advances in treatment. Without research, nothing would improve. I am confident that one day, due to research, no child will have to endure what Sienna did.”

Sam conquered the height of Everest on 28th October, raising over £1,400 for childhood cancer research…..well done Sam! You can still sponsor Sam through his JustGiving page. 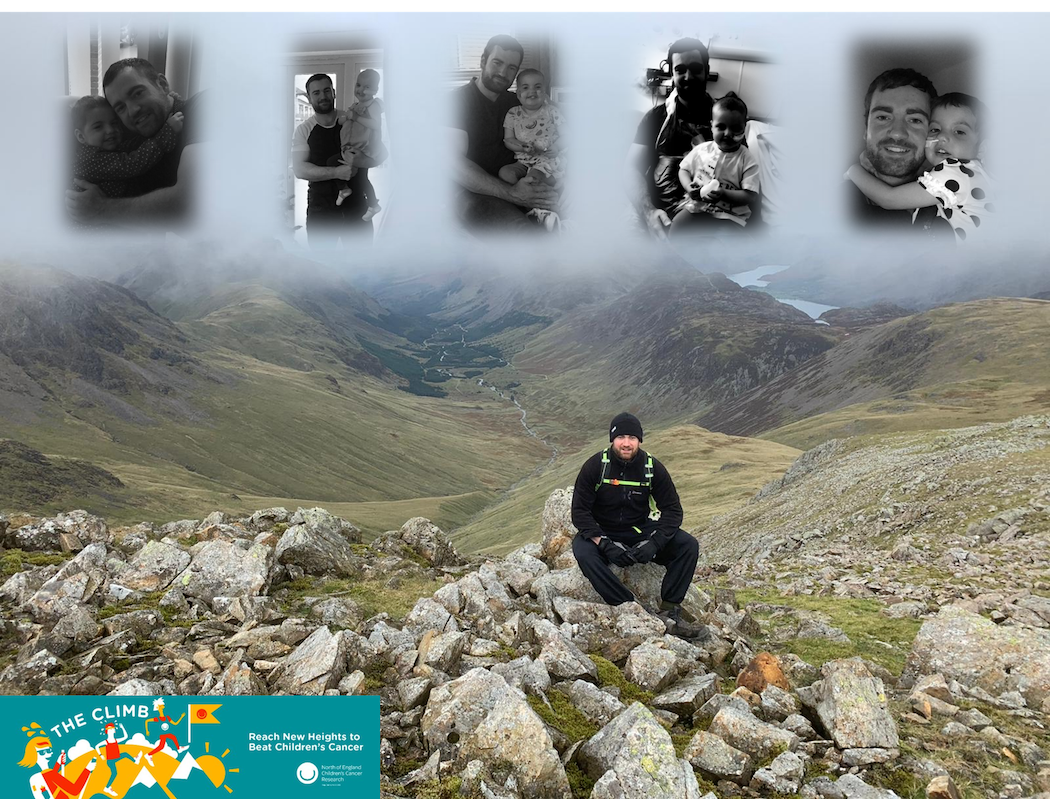 Stu is an ex- Royal Marine and talked to us about climbing the height of Everest in a day – a challenge that we really wondered if it was even possible. Stu recruited two other ex Marines, Disney and Ian and over a month they trained for the big day, which on the 28th October also marked the birthday of the Royal Marines.

Stu and friends took 32 hours non stop to complete the challenge. See below his 2-part video diary… in his words it was “absolutely honkin!!” 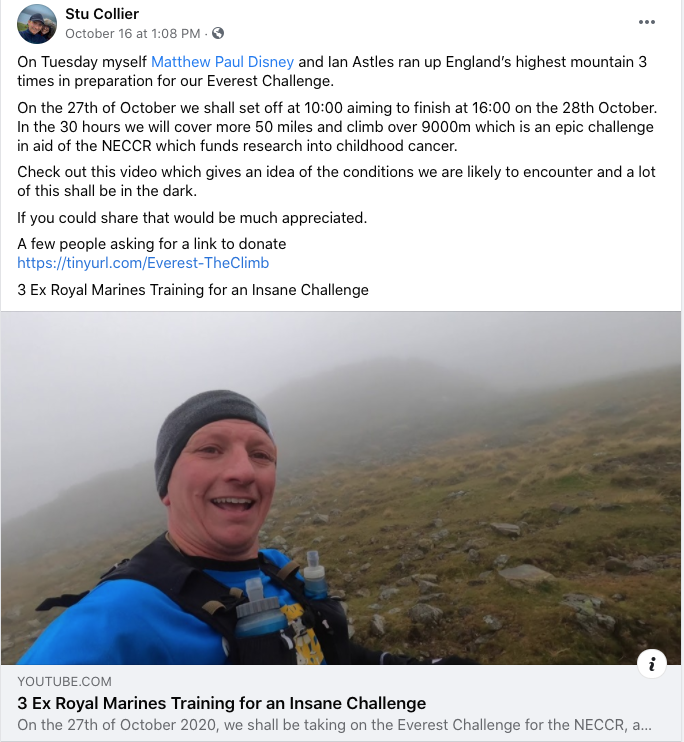 Kerry needed a new challenge to take on and The Climb came at just the right time. In a conversation with a friend one day, she decided to take on Everest using the local steps around Tynemouth and in her own home to do the majority of the climbing. She managed to get a few other friends involved and they all kept each other going! Kerry said “At the start I thought I might have bitten off more than I can chew but I’ve only gone and climbed Everest in 19 days!! She kept climbing in October just for fun! 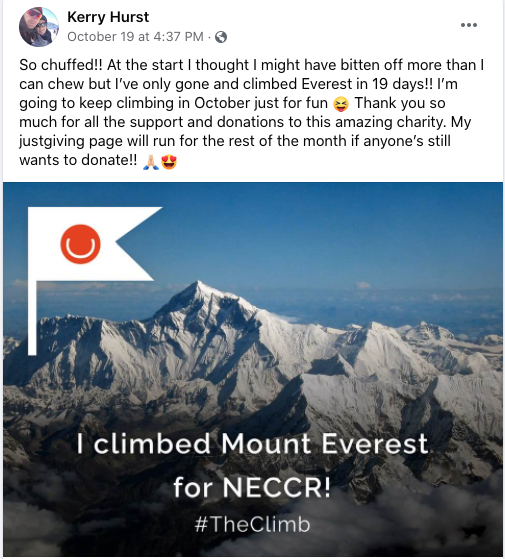 A team from Sintons almost doubled its goal of scaling the height of Mount Everest. Throughout the month an eight-strong team took part using a variety of means of exercise, ranging from outdoor walking and running, to climbing the stairs at home.

David Pritchard, head of marketing at Sintons who led the firm’s participation in The Climb, said: “We are delighted with the total we have collectively achieved, and have pretty much climbed Everest and back down again in equivalent terms. That’s a phenomenal feat for us all and has been a great team effort on behalf of NECCR.” 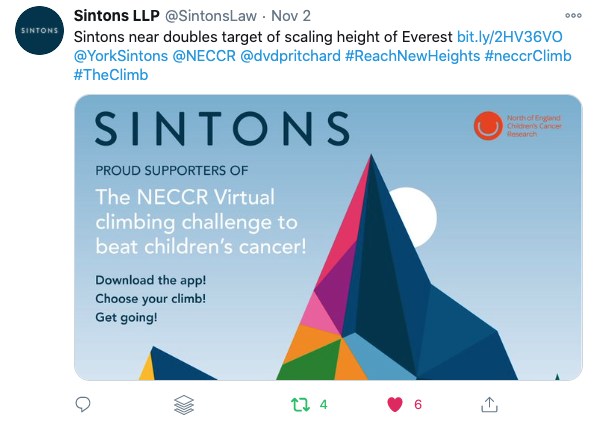 Simon took on the climb as part of The Climb challenge with Encore Envelopes – another of NECCR’s corporate supporters. Simon took to the stairmaster at the gym, which is some undertaking over 8848m, saying “Never ever do I want to see the stairmaster in the gym again”

We’d like to say a HUGE thank you to all of our climbers and congratulations to our Everesters.

Did you get to Everest during your Climb Challenge and want to be included? Message Heather with an image and short piece of text and we will update our story! 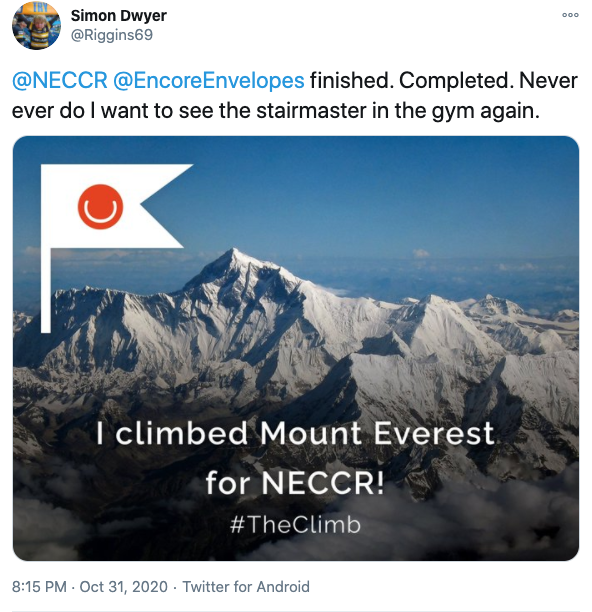 NECCR was contacted by Neve and Abbie’s dad Mark, who has shared their story below – these are his words:

Neve and Abbie were disappointed they couldn’t run with their Daddy when the Cancer Run was cancelled, but when they found out about ‘The Climb’, they jumped at the chance to get involved.

Biting off more than I thought they could chew, we opted to take on the World’s summit and Mount Everest. This meant averaging nearly 300m per climb every day in October! How hard could it be I thought..  Well after the first two days of only getting 3 metres per climb of their stairs at home and 7 metres for the Sundial stairs in Silverlink park, very! If not genuinely impossible.

They got to it every day though. After school, before bed, after clubs and ALL weekend, until they blasted their daily averages to the top of some awesome summits. We visited some great local sights, always looking for the steepest hills and stairs to get the most height each and every climb.

They’d never walked up and down so many stairs! It was brutal at times. Motivated by the app and finding out which mountain was being reached next, they always fired on, with their legs burning and all of our heads banging. There were tears and some mild tantrums in the wind and rain, but there was so much heart and they never gave up, seeing some special locations and sights along the way.

Reminding themselves why they were doing it,  each and every climb helped them no doubt. We honestly didn’t think they could keep it up for the entire month, but on the afternoon of Halloween at the top of Carlisle Park, they reached their Everest and raising over £1000 for NECCR along the way.

We couldn’t be more proud of our two little climbing legends – Everest-ers! Smashed it!

Well done girls, and thank you from all at NECCR – you should be VERY proud!! 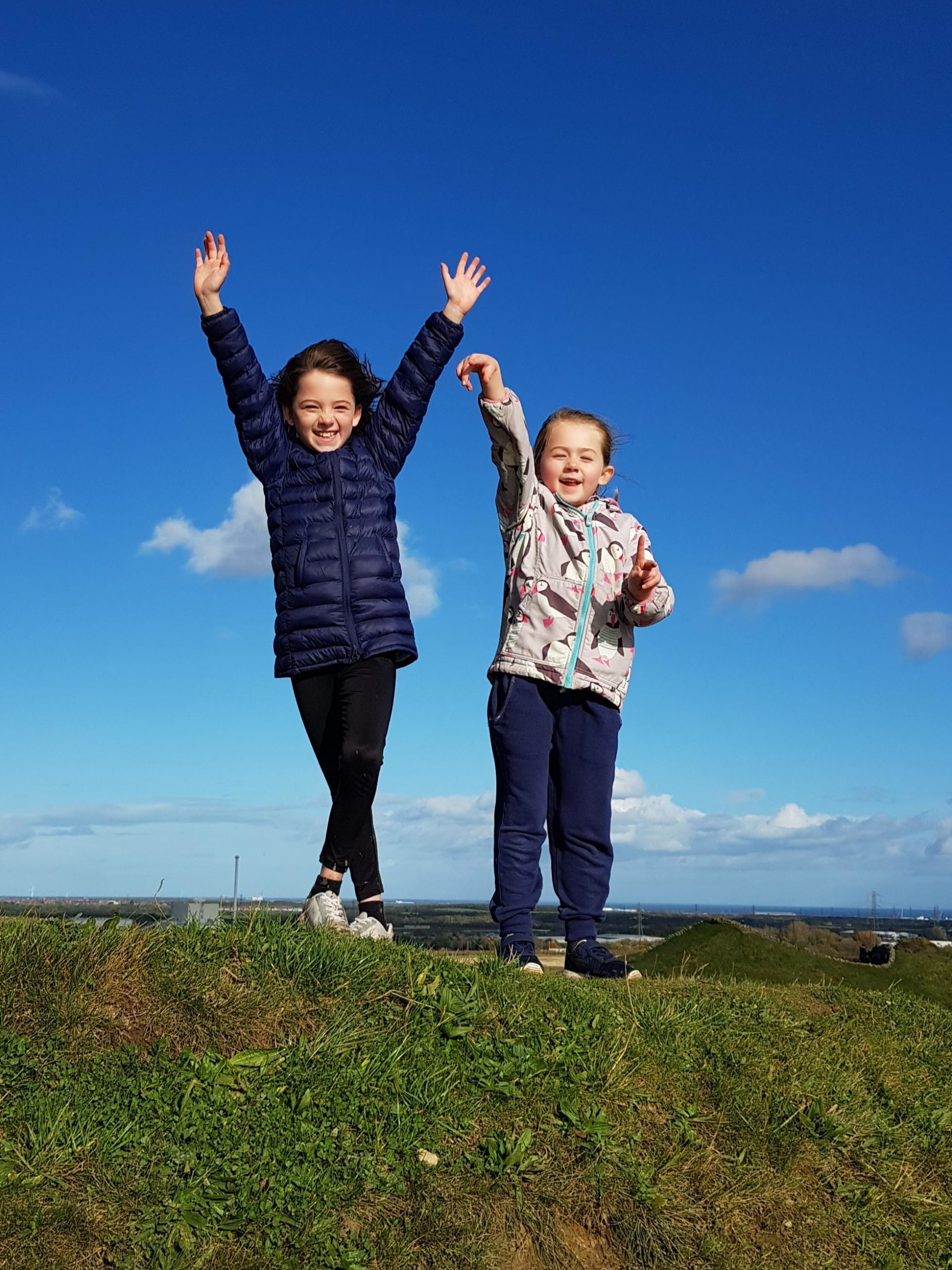 See how other Climbers got on with their challenges in our event gallery! 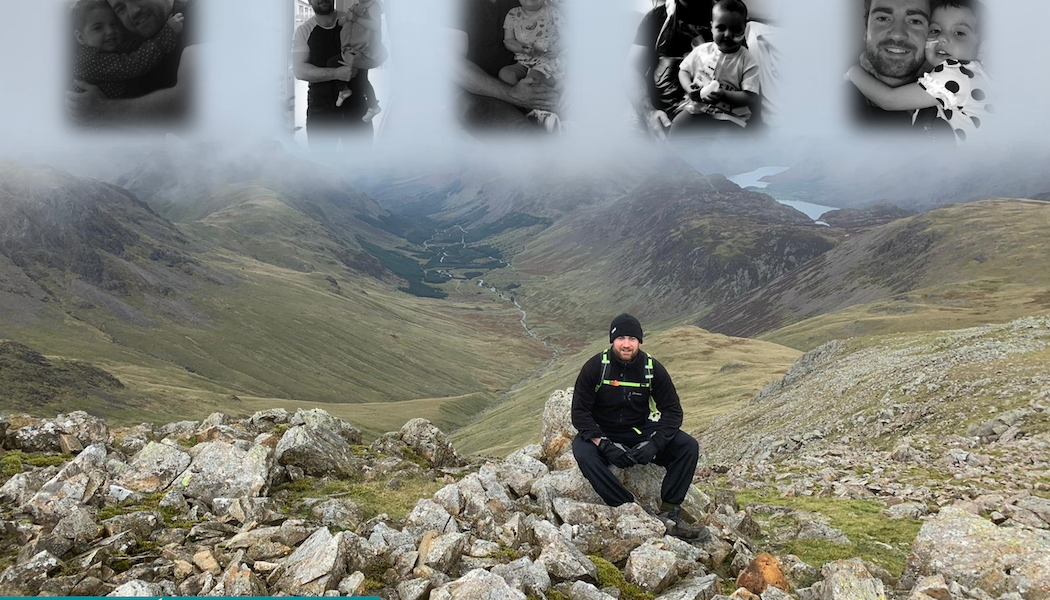 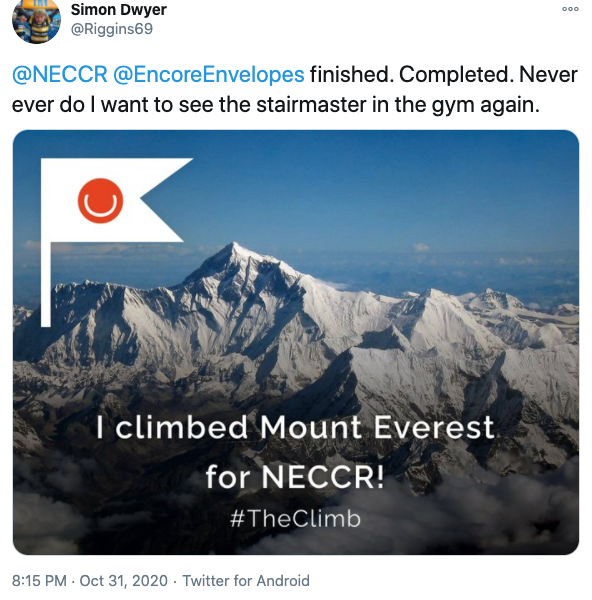 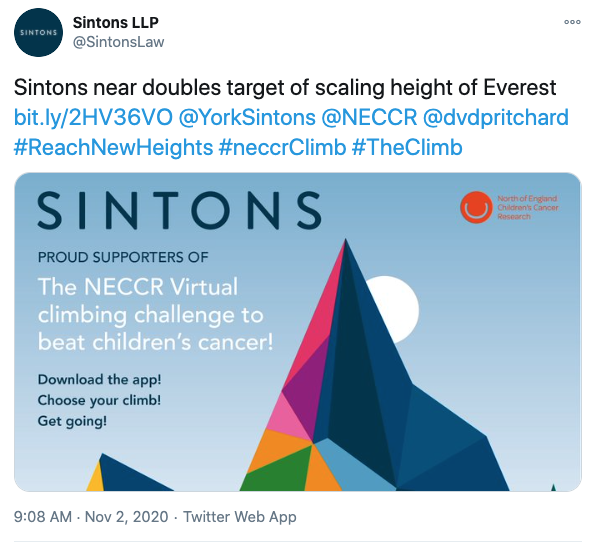 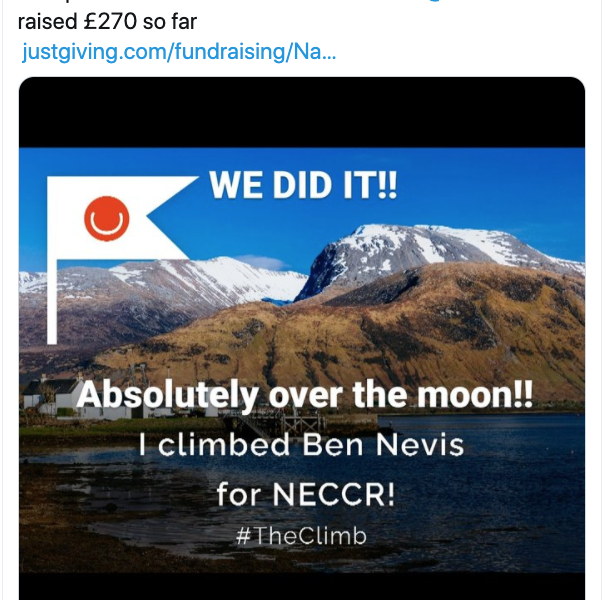 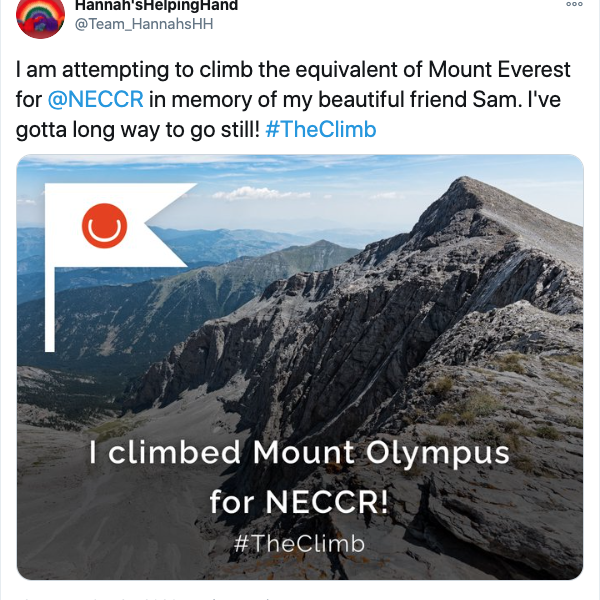 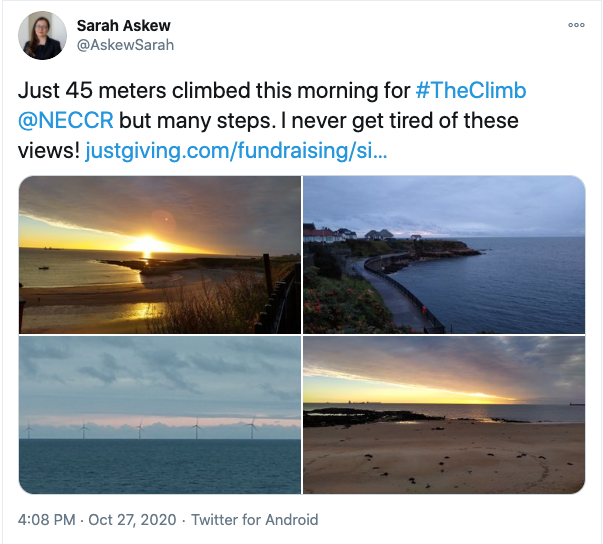 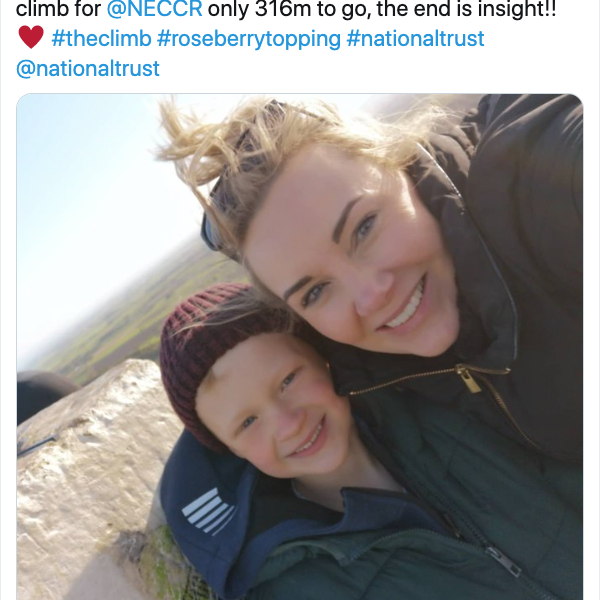 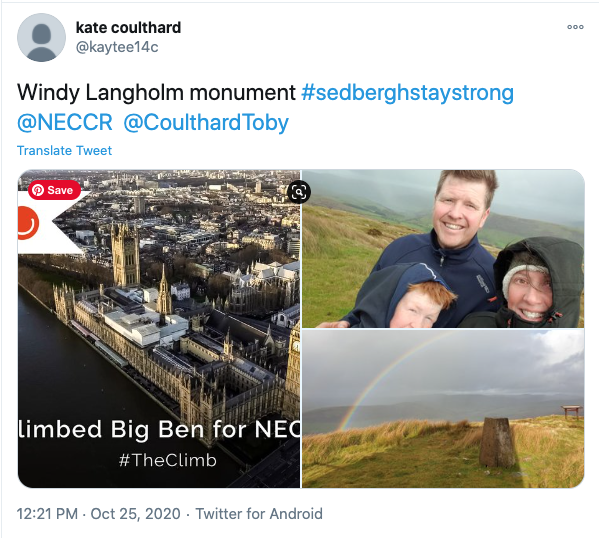 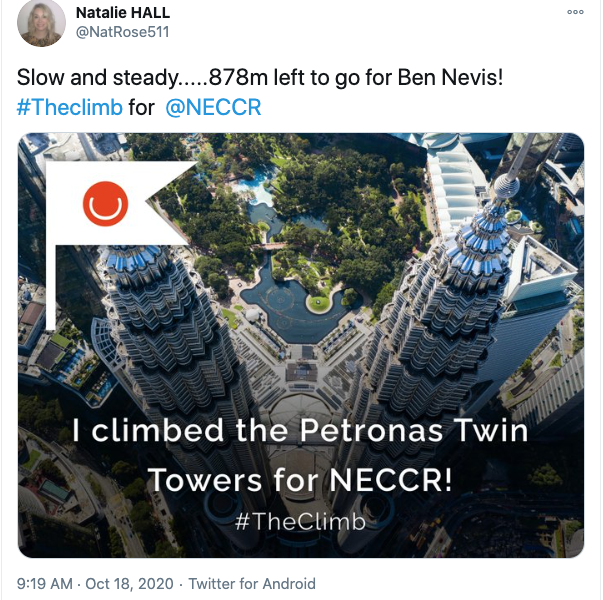 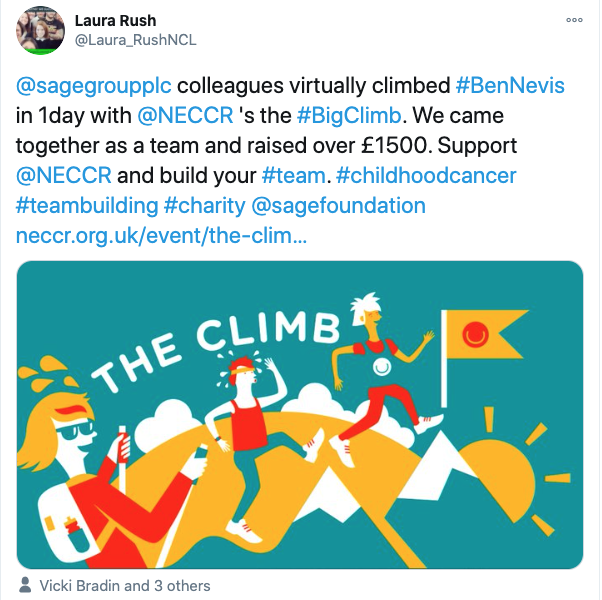 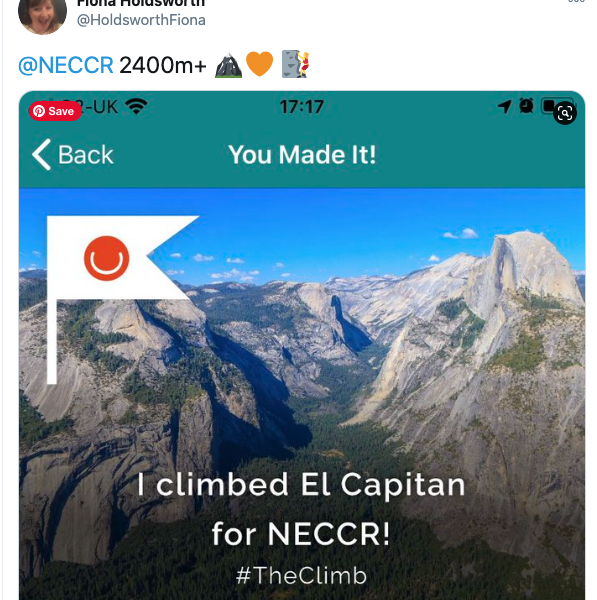 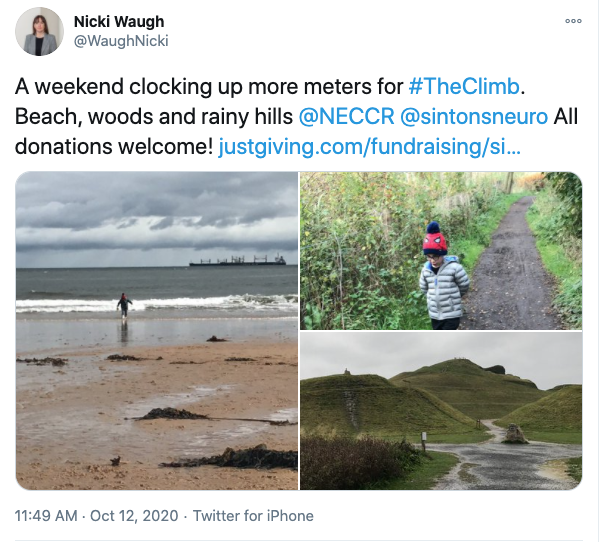 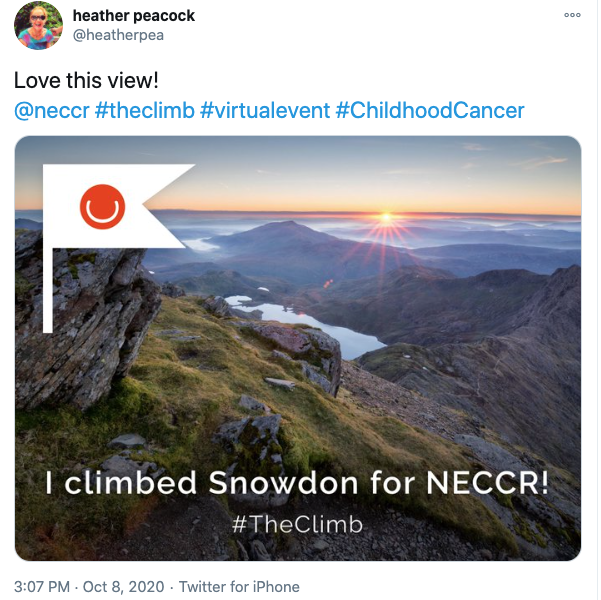 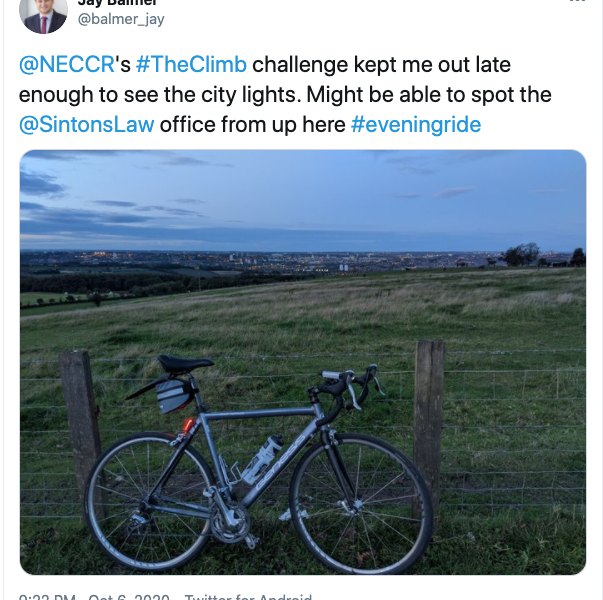 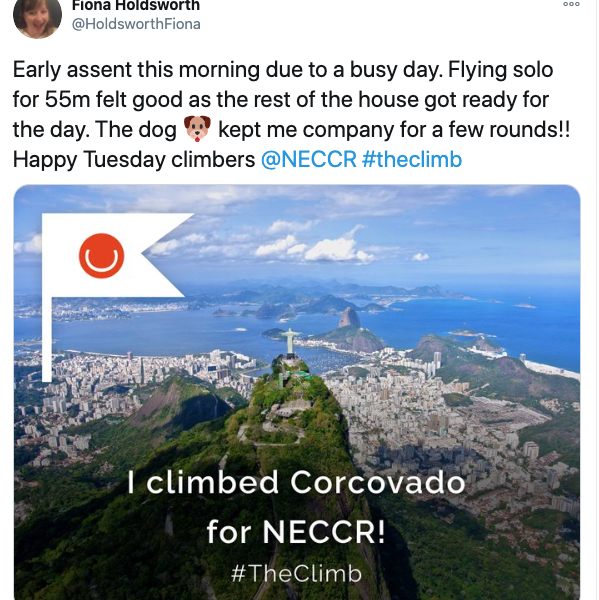 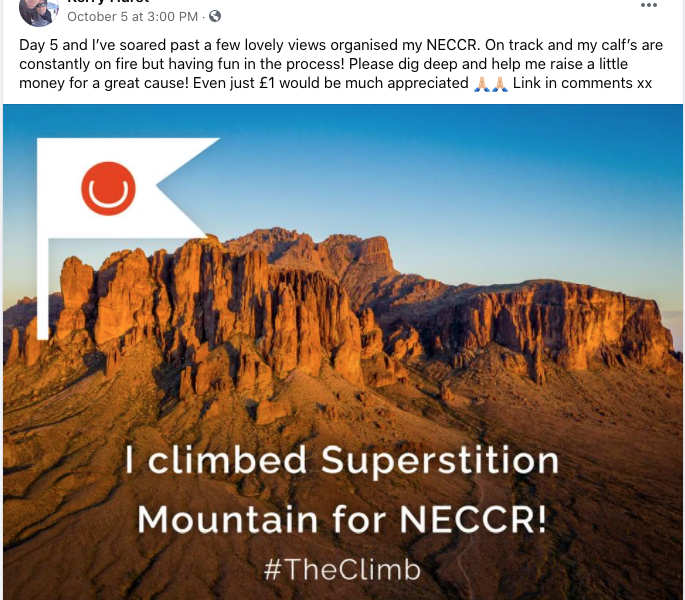 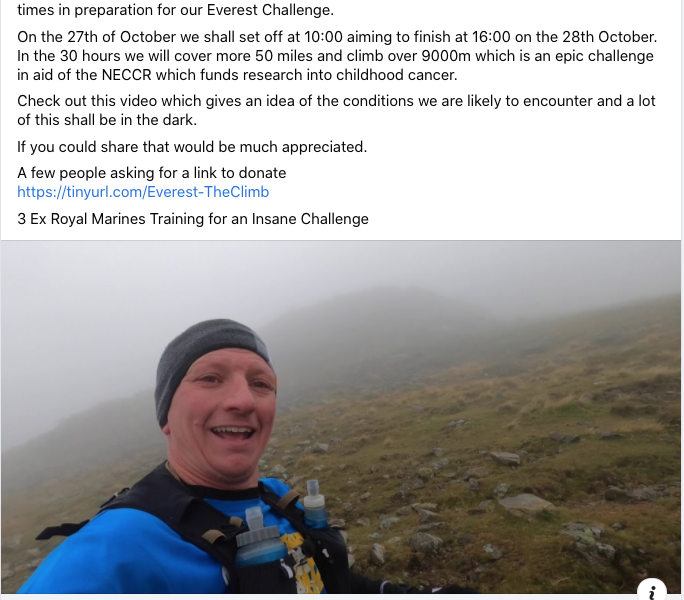 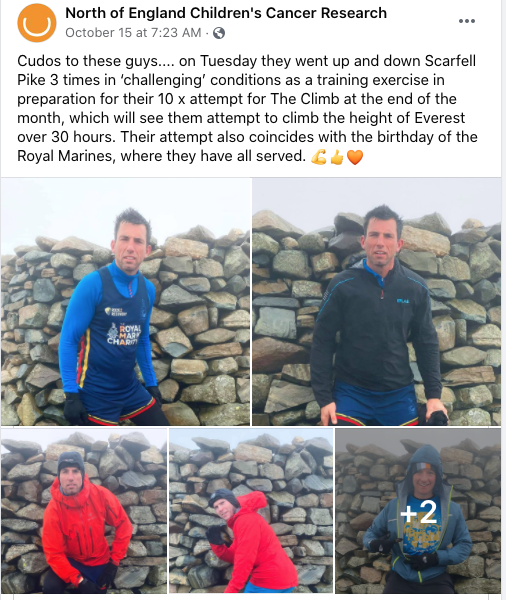 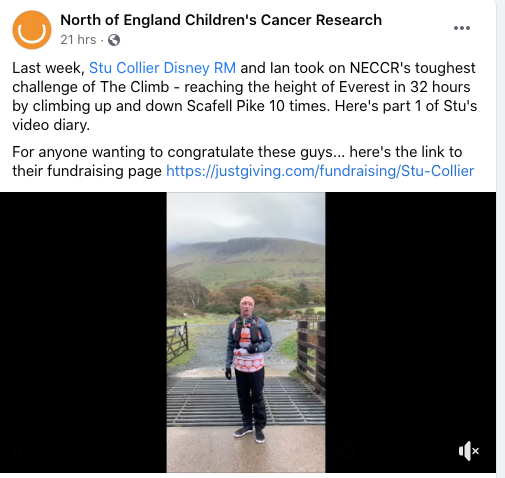 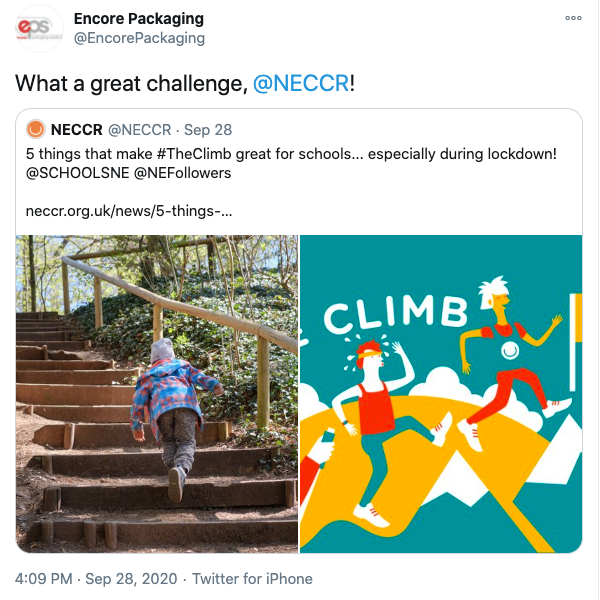 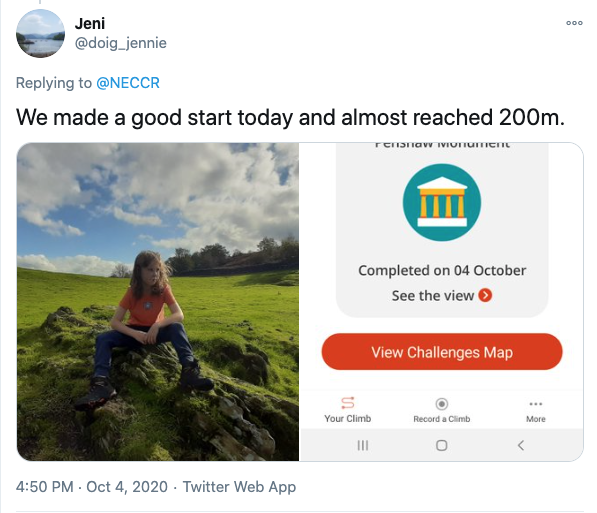 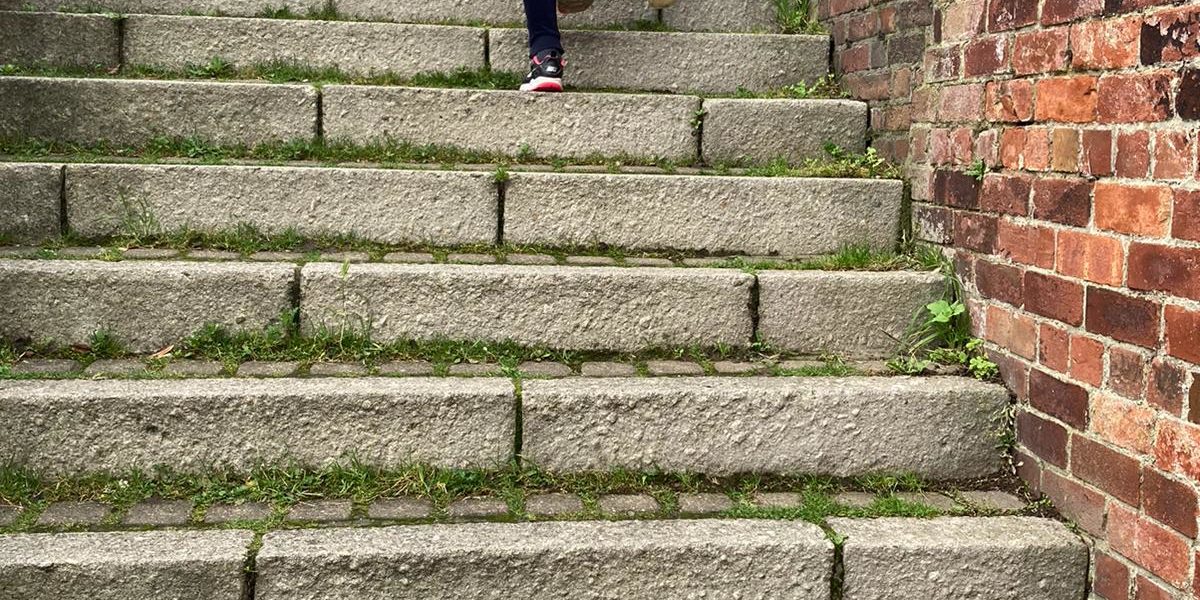 Fundraiser of the month: John Gardiner
Back to top
Why not sign up to our newsletter? Click here
×